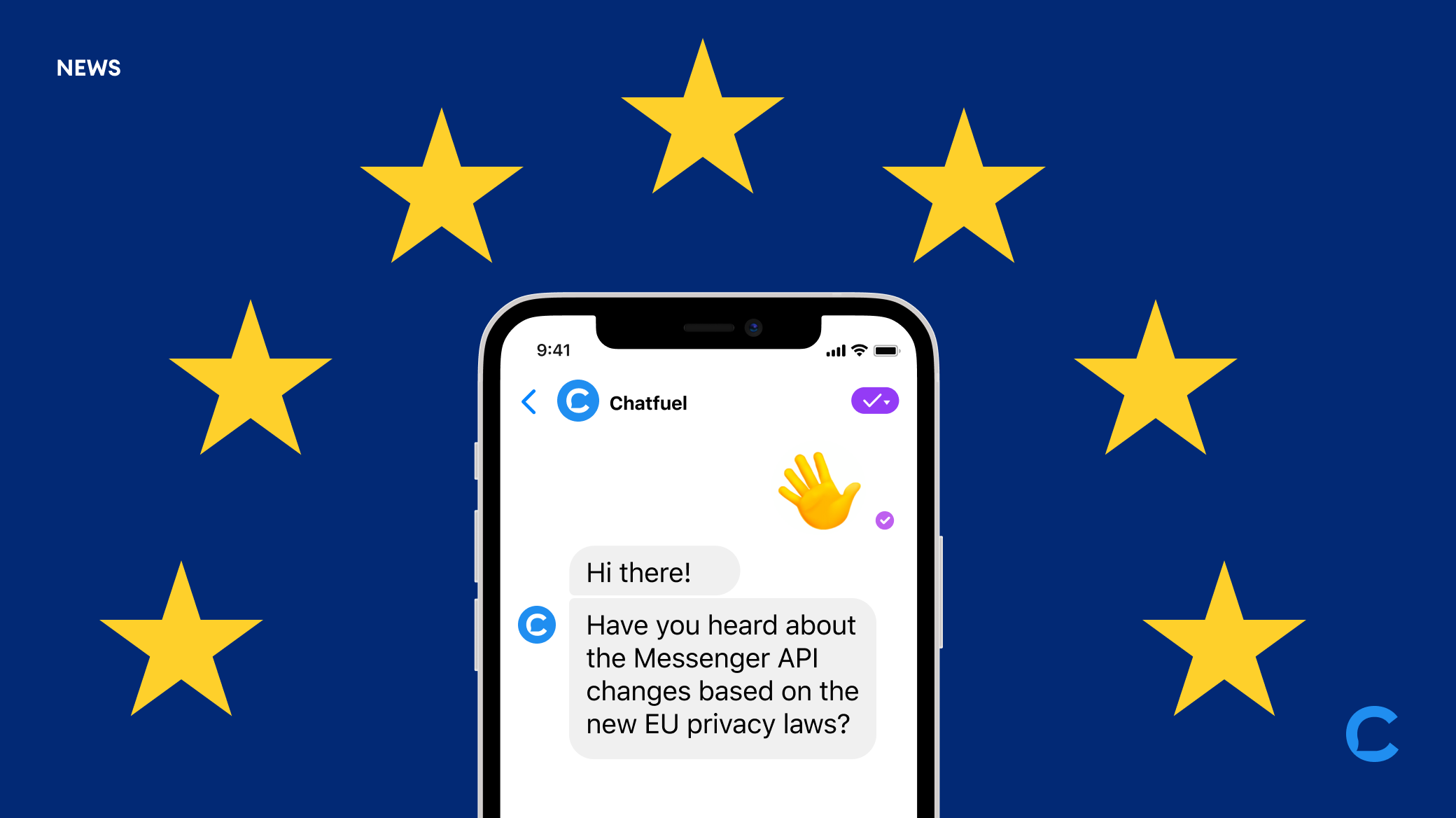 To be a successful Messenger chatbot marketer, you need to make sure your bot follows Facebook's Messenger policies, which can and do change over time based on laws (such as GDPR) and other factors. With some new rules, you'll need to adjust your bot to avoid the risk of it or your page being blocked. This was the case with Messenger's March 2020 policy updates. Other rules mean that certain Messenger functionalities will no longer be available, and you'll need to adjust your bot so it's still effective for users in light of the changes. The most recent updates to the Messenger API and policies fall in this second category.

To comply with forthcoming privacy laws in Europe (GDPR) and Japan, Facebook has announced some changes to Messenger functionalities. These changes will be effective as of December 16, 2020. You can read Facebook's full technical summary of the changes and their FAQs on the topic. Or, to make it easier, scroll on for our simplified guide that will help you understand if/how these changes will affect your chatbot, and how to make adjustments if so. Note that we'll update this article as needed to reflect any further changes announced by Facebook.

Who will be affected by these changes

These Facebook Messenger policy changes will affect your Messenger chatbot if one or more of the following are true:

*Note that, in this case, "Europe" refers to the 30 European Economic Area (EEA) countries: the 27 countries in the European Union (EU), plus Norway, Iceland, Liechtenstein, and the United Kingdom.

Which Messenger functionalities are changing

To comply with these new European and Japanese laws, certain Messenger functionalities will no longer work in chatbots that fit any of the criteria listed in the section above.

In other words: If the Facebook page your bot is connected to—or any of the page's admins—are based in impacted European countries or Japan, the following Chatfuel features won't be available in Messenger for any of your users. If your page and admins are not based in any of the impacted European countries or Japan but some or all of your users are, the following features (listed below👇) won't be available for those users specifically. Again, all of the following goes into effect on December 16, 2020, and only for chatbots whose Facebook pages, admins, and/or users fit any of the scenarios detailed in this paragraph.

The JSON API, RSS subscriptions, and Cart Reminders will all still function normally as long as they don't include unsupported elements from the list above.

It's also important to note that you may be impacted by these Messenger policy changes if you're running Facebook ads that:

*That means that if your ad audience includes even one person or segment in an affected country, the ad functionalities listed below will not work.

❌ If your situation fits either of the criteria above, the following will no longer be available to you (as of December 16, 2020) when running ads:

If your page or target audience are based in any of the affected countries, you also won't have access to custom audiences. That means you won't be able to create ad audiences based on people who have interacted with your Messenger chatbot in the past. Certain messaging-related metrics won't be available anymore going forward, either. (Historical ad data will still be available, but some metrics will no longer be tracked and reported from December 16, 2020 onward.)

✅ But according to Facebook, you'll still be able to run ads that click to Messenger (including through the Click-to-Messenger Ads Entry Point) if you use these substitutions:

How to adjust your chatbot in light of the changes

If your chatbot will be affected by these changes, you'll likely need to make some adjustments to make sure users still have a positive, complete experience with your bot. Here are the actions we recommend taking, based on whichever scenario fits the situation with your Facebook Messenger chatbot.

Scenario 1: Your page, admins, and users aren't based in any of the impacted countries.

That means if you fit all three of these criteria:

...then these changes don't affect you, so there's nothing you need to do to adjust.

Scenario 2: Your page and admins aren't based in any of the impacted countries, but some of your users may be.

If your Facebook page and its admins are based in places other than the affected countries but you expect your bot to interact with users from any of these countries, you'll need to make some changes.

First, duplicate the existing chatbot flow(s) which you expect users from affected countries to interact with. (To do this, click the three dots next to the name of the flow in Flow Builder. Click Copy, then choose to copy the flow to the chatbot you're already in.)

The duplicate version of the flow will be for your European, Japanese users. Customize this flow to accommodate the new functionality changes. To do this, you'll need to remove the following features, which will no longer be supported for users in impacted countries:

We'll soon release a system attribute that will help you identify the users coming from affected countries, so you can serve them different content. As soon as the attribute is live and you can use it in your bot, we'll make sure to notify you in the platform. Once that happens, continue with the following steps. 👇

Once you’ve finished editing the duplicate flow(s) for users in affected countries, add a Condition plugin at the beginning of your bot.

If you're using any advertising tools to target users in Europe and/or Japan, you might also be affected by advertising changes. Make sure to check the section above for details.

Scenario 3: Your Facebook page is based in one of the impacted countries.

In this situation, all conversations with your Facebook page will be affected, so you’ll need to remove the following unsupported features from your chatbot completely:

Also, the advertising changes will affect you, so make sure to check and understand the above section of this article.

Scenario 4: Your Facebook page isn't based in one of the impacted countries, but one or more of your page admins are.

If possible, your best option is to demote these admins who are based in affected countries to a lower-tier page role (such as editor) before December 16, 2020. That way, your chatbot can still use all Messenger features and functionalities (except for in the flows built for users in impacted countries).

Still have questions about these new regulations, or need advice on adapting your chatbot to comply? Reach out to us at team@chatfuel.com.